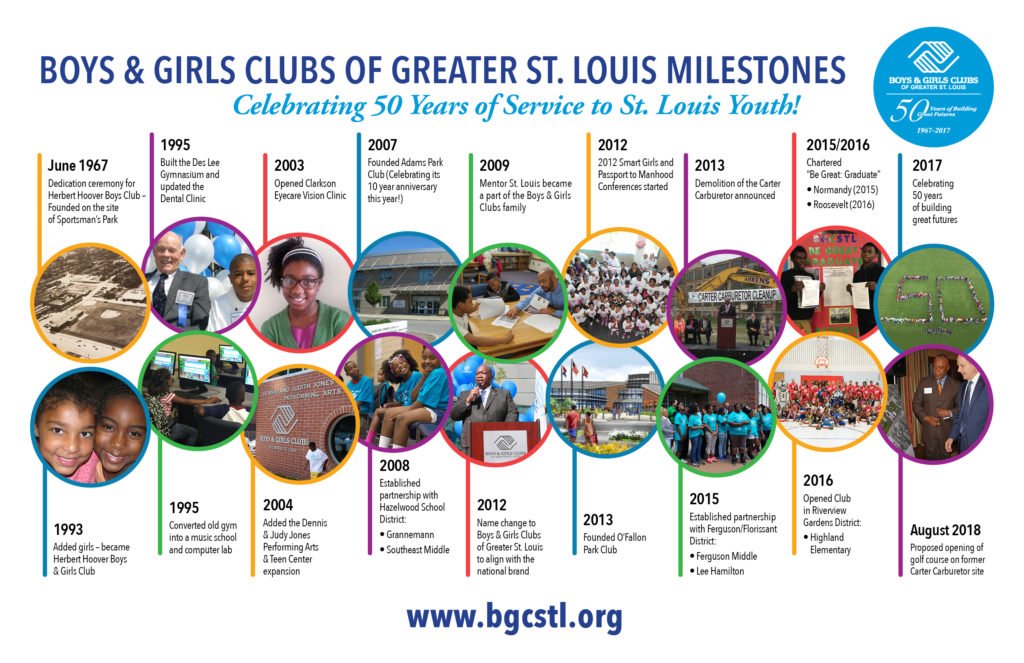 The Boys & Girls Clubs of Greater St. Louis (BGCSTL) is celebrating a pivotal and significant milestone this 2017 – – its 50th year of service to countless boys and girls in the St. Louis region!

When the Cardinals baseball team moved to its new downtown stadium in 1966, Richard Amberg (then publisher of the Globe-Democrat newspaper) persuaded August A. Busch, Jr. and Anheuser-Busch Brewery to donate the property for use as a Boys Club. After receiving the green light, Mr. Amberg called on several key area business leaders to raise the capital needed to build a facility on the site of Sportsman’s Park. The Herbert Hoover Boys Club was born.

The planning committee spared no expense to ensure that boys had all the amenities needed to be safe, have fun and stay out of trouble. The Club offered swimming, boxing, baseball, basketball, football, woodshop, photography, fishing derbies, billiards, field trips and holiday parties. There was even an on-site dental clinic! Vocational, recreational, educational and social development programming was evident in every corner of the building.
The Club was named after Herbert Hoover, former U.S. President and Amberg’s friend. It also honored President Hoover for his more than 28 years of serves as Chairman of the board of Boys Clubs of America. Mr. Hoover, who was orphaned at the age of ten, spent most of his post-presidential years helping youth from disadvantaged circumstances.

Although officially a boys Club, girls were always on the scene. They competed as members of the swim team, cheered for football and basketball teams, and took part in fieldtrips. Following the trend of other Clubs across the country, the Herbert Hoover club started admitting girls for membership in 1993, and the name was changed to Herbert Hoover Boys & Girls Club. In 2012, following the expansion of services and the establishment of club operations in south city and north county, the agency changed its name to the Boys & Girls Clubs of Greater St. Louis. This decision was made to reflect the organization’s growing footprint, and more strongly align the St. Louis operation with the national brand, Boys & Girls Clubs of America.

For the past fifty years, the Club has been at the forefront of youth development, proudly working with young people from a variety of backgrounds and circumstances. BGCSTL strives to ensure that our community’s youth have greater access to quality programs and services that will shape their lives and build their futures.

Dr. Flint Fowler, President of the Boys & Girls Clubs of Greater St. Louis said of the anniversary, “We are excited to be celebrating 50 years of providing youth development services throughout the St. Louis region. Our success compels us to address the needs of more kids, more often and in more places during non-school hours. It’s our hope that every kid who comes through our doors, leaves, having graduated from high school with a plan for their future. We are very thankful to community partners, leaders and funders, past and present, who help us continue our proud tradition of service to St. Louis’ youth.”

In addition to after school, summer and sports programs, for as little as $25 a year, Club members also receive free dental and vision care.